‘Death trap.’ Trucker, others being sued after 3 die in 7-car pileup on SC interstate 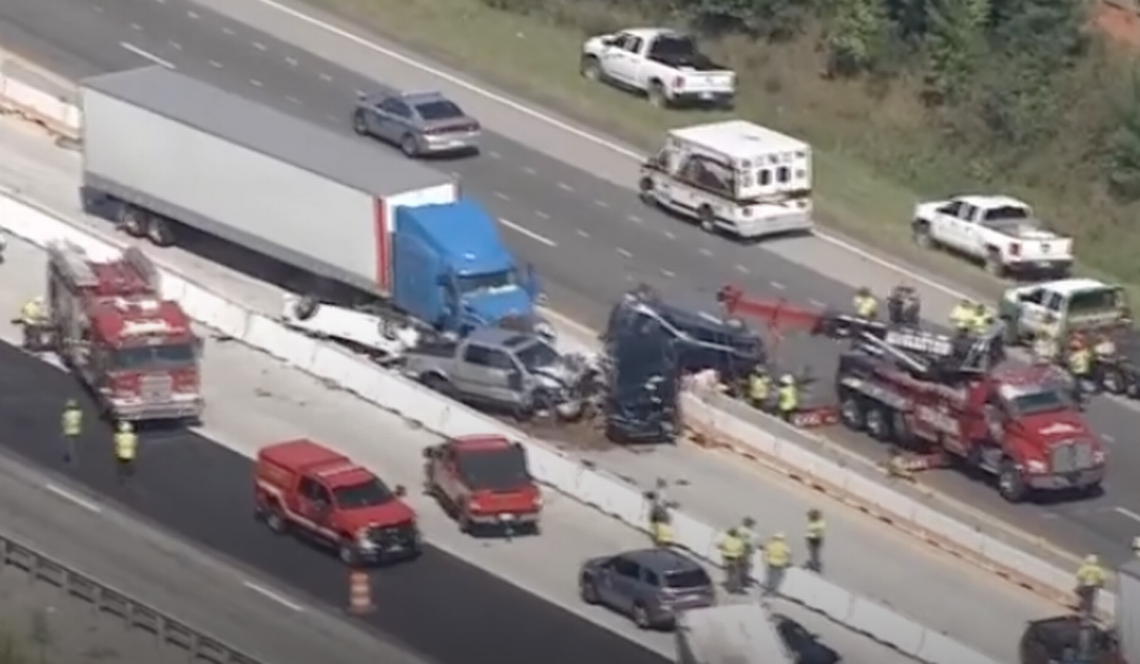 Karen Goggin spent her life taking care of people all over the world — from Massachusetts to Alabama to Germany to Tennessee. At the same time, she spread what she knew about nursing to a new generation, served as an elder in her Presbyterian church, played in the handbell choir and each year coordinated the Christmas angel tree.

When she retired, she and her husband, Thomas, chose to settle in rural Lake Frederick, Virginia, with its slip of a lake known for largemouth bass and bluegill, yet not too far from their son Brian in Washington, D.C.

In July, Karen died in a seven-car pileup on Interstate 85 near Gaffney, South Carolina, an accident Cherokee County Coroner Dennis Fowler said never should have happened.

The Goggins and McElroys were among the motorists stalled in traffic that day in what highway engineers call a chute, where one lane is edged in concrete barriers to keep vehicles away from construction during a road widening project.

Fowler had another name: “death trap.”

The cars had nowhere to go when an 18-wheeler rammed into the back of the line.

On Tuesday, Thomas Goggins filed lawsuits in federal court alleging Blythe Construction, Zachry Construction, Johnson Mirmiran and Thompson were negligent in design and execution of the I-85 widening project and Cowen Systems and its employee, trucker John Allen Ferguson, were negligent in causing Goggin’s death and his injuries.

Meanwhile, South Carolina transportation officials are going ahead with plans to continue using the “chute” design for other upcoming highway projects, including on a heavily traveled interstate in the Midlands.

The state Department of Transportation has used chutes since 2003 in areas where an interstate highway is too narrow to pave beside it to maintain two lanes of traffic.

Chutes have been used on Interstate 20 in Richland County and Interstate 85 in Spartanburg County.

Christy Hall, secretary of the S.C. DOT, said an upcoming project on Interstate 26 spanning Lexington, Richland and Newberry counties will require the use of chutes.

She said on the Interstate 20 project, 12 people died in crashes since work began in 2016, but none were in the chute.

“If we restricted to one lane, we would have had backups to the North Carolina line,” she said.

The $830 million I-85 project started in July 2017 and is an extensive reworking of a highway that carries 55,000 cars per day through Spartanburg and Cherokee counties, about a quarter of which is truck traffic.

It required 10 miles of chutes north and southbound.

Hall defended the number of miles, saying people have the misconception that with a road widening project you begin at one end and move forward. The truth is it happens in stages, from moving and replacing utilities, foundation work, drainage, grading and more.

In the case of I-85, numerous bridges required rebuilding and frontage roads being moved.

Fowler, the Cherokee County coroner, said first responders have been concerned about limited access to the chutes when accidents happen and have had meetings with Hall to express their concerns.

“While state officials have endorsed them at two separate public meetings in Gaffney, I disagree with their being safe for motorists,” he said in a news release after the July 15 accident in which Goggins and the McElroys died.

“It seems none of those officials are around to ride with me to knock on the doors of next of kin to deliver the message a loved one has been killed in this maze of concrete.”

In an interview earlier this month, Fowler said another concern was the fact that a 60 mph speed limit was too high for such a narrow and confined roadway, and the highway patrol was not enforcing the law that trucks could not use the chute.

Hall said she was notified by a transportation staff member about the fatal I-85 accident within 20 minutes of the pileup.

“It’s a deadly mix of high speed and inattention,” she said, a situation she knows too well. She said she, too, has been hit from behind while in a queue of cars.

On July 15, the Goggins were on their way to Atlanta to help their younger son, Sean, move out of his apartment. He had recently graduated from Emory University, the family’s attorney, Ken Suggs of Janet, Janet and Suggs in Columbia, said.

They were in a Ford Escape when Thomas Goggin saw in his rear-view mirror a truck coming at a high rate of speed. His wife was in the passenger seat.

Suggs said the Escape’s black box revealed it went from 0 to 60 mph in the second the truck hit it.

Fowler said the McElroys in the car in front of the Coggins died at the scene. Others suffered minor injuries.

In all, seven cars were involved in the pileup, including the truck that rear-ended the Goggins. Some of the cars ended up in the northbound lane from the force of the collision.

In an affidavit submitted with the Goggins’ lawsuit, Brian Bottomley, an engineer in Illinois, said the speed limit was too high and the truck exclusion in the chute was not properly enforced.

The lawsuit said some 200 accidents have occurred during the I-85 project.

Suggs said Thomas Goggins, who flew air ambulances after a military career, suffered a shoulder injury and broken ribs. He’s recovering but is devastated by the loss of his wife, Suggs said.

Since the accident, the DOT has removed five of the 10 miles of chutes and plans to take up the rest by the end of the year. Hall said it will likely be 2024 before the widening work is completed.

The South Carolina Highway Patrol has not made its accident reconstruction report public, and no charges have been filed, Cpl. Joel Hovis of the Highway Patrol said.

Suggs said he has been told the report will be finalized and released in October.